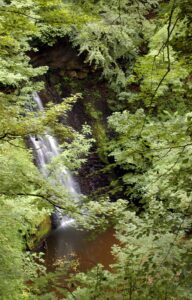 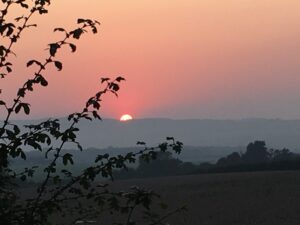 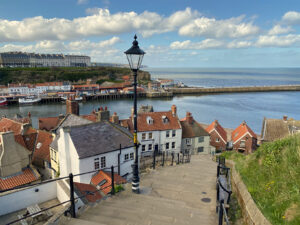 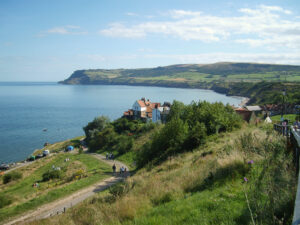 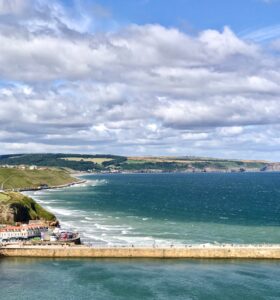 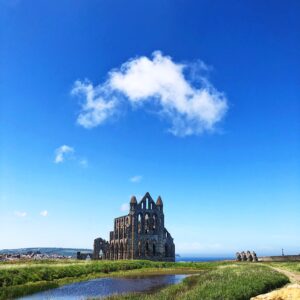 We are between the moors and the sea. The walking in the Whitby area is extensive and varied and most of our guests do not use the car during their stay. We are only two miles from the quaint and bustling seaside town of Whitby, and guests enjoy the 40 minute walk along the Cinder Track. This all weather former railway line for walkers and cyclists, leads to Whitby in one direction and Robin Hoods Bay or Scarborough in the other. Cliff tops routes are another option and the views and breathtaking.

Whitby has two miles of sandy beach with a surf school in the summer. The town itself has winding streets, quaint cafes and bars, pubs with live music and lots of special events including the famous ‘Steampunk week-end’. And of course the famous Whitby fish and chip shops. You can find out more about the towns’ past, from dinosaurs and fossils to Captain Cook, in one of three museums. There is even a Dracula museum marking the birthplace of the story which was inspired by Whitby Abbey and surrounds.

The jurassic sandstone beach at Robin Hoods Bay is a favourite with fossil hunters. And the village, a former smugglers haunt, is a fascinating myriad of tiny streets and cottages. There are a number of cafes and pubs and gift shops too.

Other iconic villages in the North York Moors National Park include Goatland of Heartbeat and Harry Potter fame and Grosmont, the Northern terminus of the North York Moors railway one of the most popular heritage lines in the country. Leaholm is another popular destination for a day out with and mini garden centre, Poets Cottage Shrub nursery, great tearooms and good circular walks.

While you can enjoy total peace and tranquility on our site we are surprisingly close to a casual night out .The Windmill Pub in Stainsacre  serves food 7 nights a week. It is a 15 minute walk through the woods. The Hare and Hounds at Hawsker and the Wilson Arms at Sneaton are also within walking distance cross county.

The routes to the Cinder Track and pub are via varied terrain so because of this, and the layout of our site, Whitby Log Cabin holidays are only suited to the able bodied. And walking boots are a must.